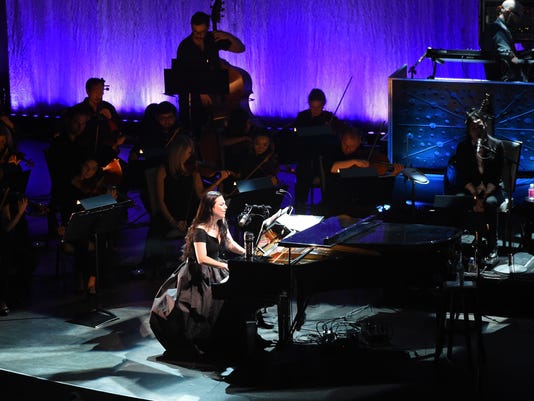 Amy Lee (C) and guitarist Jen Majura (R) of Evanescence perform with an orchestra as the band kicks off its tour in support of the upcoming album 'Synthesis' at The Pearl concert theater at Palms Casino Resort on Oct. 14, 2017 in Las Vegas, Nev.(Photo: Ethan Miller, Getty Images)

A loud rock band is getting even louder – with the help of a full orchestra. The group Evanescence merged straight-forward rock, piano-based pop and metal when it first burst onto the scene, and now it is touring with a full complement of strings.
It’s all to promote its new album. “Synthesis” features a variety of tracks from Evanescence’s career, from big hits to more obscure album tracks, but all being recorded with a full orchestra. There is also some new material on the record, including the first single, “Imperfection.” Evanescence plays one of these special “Synthesis” shows on Dec. 15 at the Grand Sierra Resort.

Evanescence is a showcase for vocalist and keyboard player Amy Lee. She is the only member of the group who was there during the band’s initial success in the early ’00s. Her current lineup includes bassist Tim McCord, the longest serving bandmate as he was with the group since 2006. Others include Troy McLawhorn on lead guitar and Will Hunt on drums (both since 2007) and rhythm guitarist Jen Majura (since 2015). 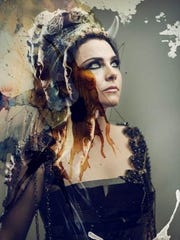 The group started in Arkansas in 1995 with Lee and guitarist/drummer Ben Moody. The duo first started performing in small coffee shops in Little Rock and released their own records before independent label Wind-Up Records heard demos and signed the band. By this time, they had a full lineup and all moved to Los Angeles.

Evanescence’s first album, “Fallen,” was released in 2003 and it was an immediate hit on rock radio. The record ended up selling seven million copies and reached No. 3 on the Billboard album charts. The sales were boosted by two top 10 singles, “Bring Me to Life” and “My Immortal.” Also popular from the album were “Going Under” and “Everybody’s Fool.”

After much touring, the band reconvened for a second album, “The Open Door,” released in 2006. That album sold two million copies, and it and the group’s self-titled 2011 follow-up both hit No. 1 on the Billboard album chart. There was another top 10 hit – “Call Me When You Are Sober” from 2006 – and several other hits on rock radio, including “What You Want” and “Lost in Paradise.”

After the lengthy tour for their third album, Lee announced that Evanescence would go on hiatus. The group didn’t return to more active duty until 2016, when they played a handful of shows in the U.S. In the interim, Lee released a soundtrack collaboration with musician Dave Eggar for the film “War Story” (in 2014), and two releases in 2016: an EP of rock cover songs called “Recover Vol. 1” and an album called “Dream Too Much” that featured children’s music (in 2016). Lee has a three-year-old son named Jack.

“Synthesis” was released on Nov. 10 and debuted at No. 8 on the Billboard album charts. Evanescence plans to continue touring in 2018 with a full European tour scheduled for early in the year.