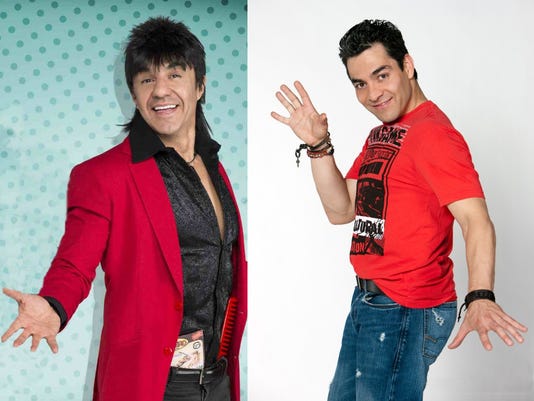 Mexican entertainers Adrian Uribe and Omar Chaparro have long careers on Latin television, and their tour in America this year plays on their perceived rivalry as well as their diverse talents. The duo will perform Oct. 28 at Grand Sierra Resort.

In this stage show, which is named “Imparables,” Chaparro and Uribe get involved in a “who can top who” type of contest, all the while telling jokes, portraying characters they are famous for on television and films, as well as singing and dancing. It’s a throwback to the “old days” of entertainment when a performer had to do all of those things to have a long career.

And, longevity is certainly a part of both men’s time in show business. Uribe was born in Mexico City in 1972, and he began his career as a theater actor in his home country, while also performing in nightclubs. Where he really hit his initial fame in Mexico was in television, where he starred on a series of popular shows and created memorable characters, some of which he performs still as part of the “Imparables” show.

Among the shows that Uribe is best known for are the comedy “La Hora Pico,” where he created several roles including El Vitor and Carmelo, and “More Sport,” where he created a character named Poncho Aurelio. He has also been in the cast of “Los Comediantes,” “Hoy,” “Picardia Mexicana” and “La Botana.”

Two of his projects also intersected with Chaparro’s career. Both men were a part of Mexico’s 2003 season of the reality show “Big Brother,” where Chaparro won and Uribe got fourth place. The two also were a part of an entertainment variety/competition show called “Good Evening.” Uribe and Chaparro also made a film together called “Suave Patria” in 2013.

Starting in 2008, Uribe moved into the world of telenovas, including work on “Alma Iron,” and as Johnny on “My Heart is Yours.” He also has hosted a dance competition show in Mexico called “Dancing for a Dream.”

Chaparro’s career arc has some similarities to his pal Uribe. Born in Chihuahua in 1974, his start was in radio on the Chihuahua program “Los Visitantes,” which became a TV later in that decade. With that foot in the door, Chaparro went on to create comic characters on several national Spanish-language shows, including “XHDRBZ,” “La Jaula” and “Black and White.”

In a reverse move from Uribe’s career, Chaparro first acted on the stage in Mexico in 2005 as part of the comedy “La Cena de los Idiotas.” A talented singer, he’s also performed on the music competition series “Contando por un Sueno” and hosted a similar show called “Buenas Tardes.”

In the past decade, Chaparro has continued to diversity his career. Now a resident of Los Angeles, he released his own album called “Me Enamore de Ti,” starred in a parody of “The Fast and the Furious” called “Superfast!” and hosted the Nickelodeon Kids' Choice Awards of Mexico.