Hard rock fans will get a double-fisted blast of sonic sound when Primus and Clutch perform Aug. 17 in the Outdoor Arena at the Hard Rock Hotel-Casino in Lake Tahoe.

Hard rock fans will get a double-fisted blast of sonic sound when Primus and Clutch perform at 6:30 p.m. Aug. 17 in the Outdoor Arena at the Hard Rock Hotel-Casino in Lake Tahoe.

Fans of Primus, the eclectic rock trio from Northern California, will be treated with a dose of new music as the band is releasing its ninth studio album, “The Desaturating Seven,” on Sept. 29. The album’s first single, “The Seven,” already has been released.

Primus’ music has long been difficult to categorize – it’s been called everything from heavy metal to experimental rock to “thrash funk meets Don Knotts Jr.” Now, the new album will apparently bring about a fresh label for the band, courtesy of bassist and lead singer Les Claypool.

Claypool wrote on the band’s website, www.primusville.com, that the album is inspired by a book, “The Rainbow Goblins” by Ul De Rico, that he used to read to his children when they were young.

“I figure it’s about time someone brought ‘Goblin Rock’ back to the fold,” Claypool wrote.

It’s Primus’ first album since its 2014 release, “Primus & the Chocolate Factory with the Fungi Ensemble.” 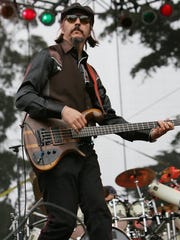 Les Claypool of Primus performs during day two of the Outside Lands festival on August 23, 2008 at Golden Gate Park in San Francisco, California. (Photo: Getty Images)

It’s been almost 30 years since Primus, whose members are Claypool, guitarist Larry LaLonde and drummer Tim Alexander, released its first studio album, “Frizzle Fry.” The album had two minor hits, “John the Fisherman” and “Too Many Puppies.” A music video featuring Metallica guitarist Kirk Hammett and a tour with Jane’s Addiction began sowing the seeds for an audience craving what Primus had to offer.

The band’s popularity grew more with the release of its second album, “Sailing the Seas of Cheese” in 1991. That featured hit songs “Jerry was a Race Car Driver” and “Tommy the Cat.” The album went gold and Primus followed that with “Pork Soda” in 1993. That album featured the hits “My Name is Mud,” “DMV” and “Mr. Krinkle.”

Primus would headline the alternative rock festival Lollapalooza that same year, followed by an appearance at Woodstock in 1994. The band continued releasing its own style of music with “Tales from the Punchbowl” in 1995; the “Brown Album” in 1997; and “Antipop” in 1999.

A 12-year hiatus from recording – although Primus continued to tour, albeit not as often as it had -- ensued until the band release “Green Naugahyde” in 2011. Six years later, Primus fans are primed for goblin rock.

Opening the show is Clutch, a stoner-rock band from Maryland that has released 11 studio albums, and several rarities and live albums, since its formation in 1991. While never having the luxury of a major radio hit, Clutch has built a loyal following of fans by staying true to its original style of music. Keeping the same lineup featuring Neil Fallon (vocals, rhythm guitar and keyboards), Tim Sult (lead guitar and vocals), Dan Maines (bass and vocals) and Jean-Paul Gaster (drums) also has helped the band motor its way to a career that’s now lasted more than 25 years.

The band has had its own record label, Weathermaker, since 2008 and when its 10th studio album, “Earth Rocker,” reached No. 15 on the Billboard Top 200 chart in 2013, it became the highest-charted album the band has had.

While mainstream radio has mostly ignored the band, Clutch continues to excite old fans and gain new ones by staying true to its core – good old-fashioned rock ‘n’ roll.