For a tribute band who started covering Pink Floyd 28 years ago, The Machine has more material than they’ll ever need. 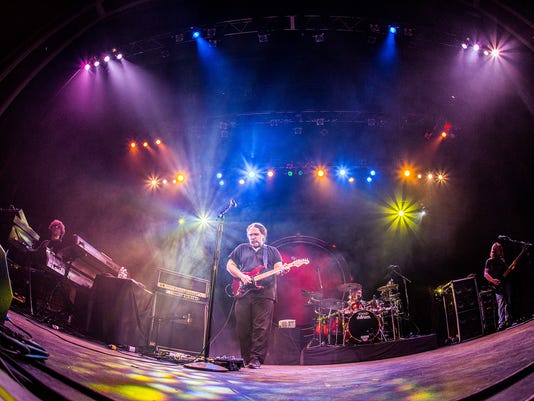 For a tribute band who started covering Pink Floyd more than 28 years ago, The Machine has more than enough material than they’ll ever need.

And while the band plays many songs from the classic lineup — David Gilmour (guitar/vocals), Roger Waters (bass/vocals), Nick Mason (drums) and the late Richard Wright (keyboards/vocals) — that is not necessarily a bad thing.

For the unversed, the psychedelic rock band from England started out playing quirky pop with its debut album, “Piper At The Gates Of Dawn” (1967). Successive releases — “A Saucerful of Secrets” (1968) and the “More” (1969) soundtrack — found the band rebelling against typical song structures and delving into ambient and experimental jams.

Guitarist/singer Syd Barrett was one of the founding members, yet lasted only for the first two albums before exiting stage left.

Those planning to attend a show with New York’s The Machine should realize the set is geared toward the classic rock enthusiast and Pink Floyd’s most popular fare.

The group’s shows are limited to mostly weekend shows and are playing a varied selection of theaters, casinos and performance halls. With all of the Pink Floyd catalog at their disposal, this quartet has little problem finding talent buyers looking a date or two.

“In 1989, our drummer was going to Albany State and got a message from and agent who said if we did all Pink Floyd material, he would book us. We were playing a bunch of different stuff, but just changed. I was landscaper at the time, and he ended up being our agent for 12 years,” guitarist Joe Pascarell said.

The group also pays attention to requests and makes sure to appease those with a broader musical palate.

“We keep track of the set lists and have a rotation of set lists to choose from. There’s some newer stuff, but not as recent as the ‘Endless River’ (2014) release. Also, there are some really obscure tunes we throw in once in awhile,” Pascarell said. “For the most part, the majority of the people don’t know Syd Barrett-era Pink Floyd music. For the people who don’t know already, we can play for quite some time, and have a 100-song playlist.”

Going to the dark side

The four members have done an entire show playing only songs by the late Syd Barrett — both solo and Pink Floyd fare — as well as music from Pink Floyd members’ solo records.

“I started playing when I was 10 years old, and only had Beatles records. My older brother got me into ‘The Dark Side of the Moon’ (1973) and I was immediately hooked,” he said about the first time he heard Pink Floyd. “It was like nothing I had heard before.”

Additionally, the band has special lights and video that accompany its shows like Pink Floyd employed during its shows.

Even with no original material of its own as The Machine, the band did release a handful of recordings including the orchestral “Symphonic Side of the Moon” played with a full symphony orchestra, “The Machine Unplugged” acoustic record and “Live in Amsterdam,” released in 2006.

The Machine’s metier still is its takes on Pink Floyd songs, which are played with the utmost reverence and respect for the originals.

“It was a natural choice when starting the band as it was our favorite band. Whenever we played Pink Floyd, fans went crazy for it. It wasn’t the kind of thing you heard in the clubs in the late ’80s. Their music is timeless; it reaches multiple generations and still remains unique,” drummer Tahrah Cohen said.

At this point in its collective career, the band is happy doing shows on its own schedule and doing whatever projects — musical or not — on the side.

The Machine may be the closest thing one will get to a Pink Floyd reunion.

“I don’t pay attention to other Pink Floyd tributes today, but I always never cared what anybody thinks of us. At least, I try to not care as I prefer much more to play songs than see them performed by someone else,” Pascarell said.