'Secret garden' near Truckee is open after a century

The delicate wetlands are home to rare carnivorous plants and willow flycatchers.

'Secret garden' near Truckee is open after a century

In this Tuesday, July 25, 2017 photo, Sasha Gennet, left and Elliott Wright, both of The Nature Conservancy, study some of the wild flowers in the Lower Carpenter Valley near Truckee, Calif. Hidden from public view from more than a century, the valley has recently been purchased by the Truckee Donner Land Trust, The Nature Conservancy and others, will be opening for tours.(Photo: Rich Pedroncelli, AP)

TRUCKEE — Pink and yellow wildflowers burst from a lush bed of grass hidden from public view for more than a century. Towering trees and snow-capped mountains encircle the wild meadow, beckoning visitors to a largely untouched piece of California's Sierra Nevada.

Conservation groups bought the land in Lower Carpenter Valley north of Lake Tahoe and are opening it for tours. It contains rare carnivorous plants and threatened birds and serves as a migration corridor for other species.

Bird songs and the gurgle of a serpentine creek provide the soundtrack in the meadow less than 8 miles from noisy Interstate 80. The ground suddenly turns spongy underfoot as visitors step onto a deep bog that has formed along parts of the valley floor. 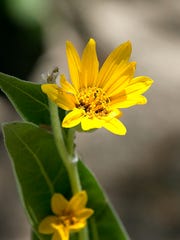 In this Tuesday, July 25, 2017 photo a goldenrod blooms in the Lower Carpenter Valley near Truckee, Calif. The wild Sierra Nevada meadow hidden from public view for more than a century is opening for tours after it was purchased by conservation groups. ( (Photo: Rich Pedroncelli, AP)

The Lake Tahoe region regularly draws tens of thousands of people to ski, hike and camp, but the piece of land along a creek near Truckee has been kept behind locked gates along a winding dirt road.

The trust and the Nature Conservancy, with other partners, bought more than 2 square miles (5 square kilometers) from the longtime owners for $10.3 million.

The partnership bought 600 acres in mid-July, but that area is so sensitive it will initially be open only for guided visits. It includes about two-thirds of the vast meadow. It acquired about half the property last year, 637 acres known as Crabtree Canyon, that is now open to hiking and mountain biking.

The partners have a contract to buy a final 80-acre parcel.

In this photo taken Tuesday, July 25, 2017, standing in the North Fork of Prosser Creek, Elliott Wright, left, of The Nature Conservancy and Kathy Englar, of the Truckee Donner Land Trust, celebrate the recent acquisition of property in the Lower Carpenter Valley near Truckee, Calif. Recently purchased by the Truckee Donner Land Trust, The Nature Conservancy and others, this meadow, hidden from public view for more than a century, is opening for tours. (Photo: Rich Pedroncelli, AP)

The sensitive 600-acre site includes "these incredibly verdant habitat areas with fens, they call them, these seeps and springs," said Elliott Wright, senior associate director of philanthropy for the Nature Conservancy.

The delicate wetlands are home to rare native sundew, small carnivorous plants that attract insects to sticky residue on their leaves.

The North Fork of Prosser Creek is fed by snow and lined by willows and once was home to native Lahontan cutthroat trout, a threatened species that could be reintroduced if no natural population has remains.

The willows provide habitat for 40 of the 270 known nesting pairs of willow flycatchers, a small insect-eating bird once was common in the Sierra Nevada, Wright said. 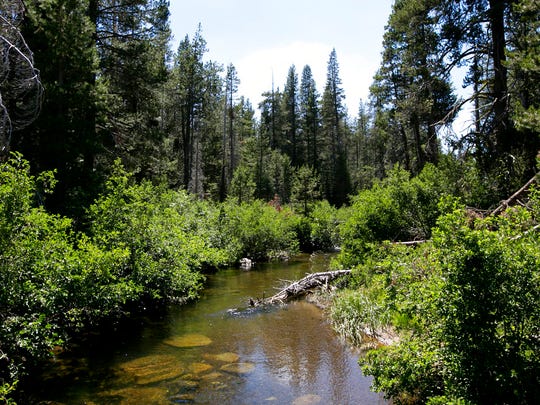 In this Tuesday, July 25, 2017 photo, the North Fork of Prosser Creek flows through the Lower Carpenter Valley near Truckee, Calif. The wild Sierra Nevada meadow hidden from public view for more than a century is opening for tours after it was purchased by conservation groups. The North Fork of Prosser Creek was once home to native Lahontan cutthroat trout, a threatened species that could be reintroduced if no natural population has remains. (Photo: Rich Pedroncelli, AP)

Seasonal caretakers protect the valley's fragile environment and wildlife, while dogs, horses and motorized vehicles are banned. The partners expect to allow daily public access by foot or mountain bike in 2019 after building a parking area, restroom, trails and viewpoints "that will allow visitors to experience the meadow without tromping through it," Englar said.

The valley was initially settled by dairyman William Carpenter and his wife, Julia. It was purchased in the mid-20th century by a group of fishermen, including newspaper publisher James McClatchy, who used it as a private retreat.

Until now, said Englar, "this was just kind of an area that was undiscovered."