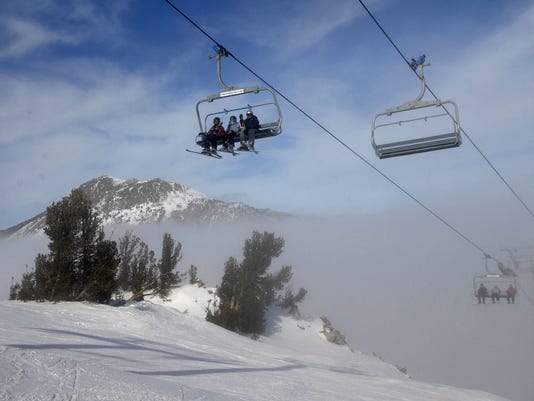 A series of Facebook posts under the name One Reno make a locavore pitch for the future of Mt. Rose Ski Tahoe, the longtime Reno-area ski resort.

In the comments under another post announcing a crowdfunding effort One Reno makes a pledge aimed at local skiers and riders who like the down-home feeling of the resort overlooking Reno which management announced in January was for sale.

“We will keep the Mountain locally owned, and never allow it to become McSki-Resort,” One Reno posted in response to a commenter who asked about development plans.

No experience, no thanks

One Reno is the brainchild of Govind Davis, a Reno resident with a background in technology who co-founded a consulting firm called MCF Technology before moving to Nevada.

Davis, who has no ski industry experience, is nonetheless seeking to put together a deal he says would put locals in control of charting a future for Mt. Rose.

“It seems like a worthy project,” Davis said. “It has personal impact, every time I look out the back window of my house I see the mountain.”

But without funding or experience is Davis even qualified to lead such an effort?

Stephen Mollath, the attorney representing Mt. Rose, which is owned by 95-year-old Fritz Buser, said sellers are unwilling to consider offers that include any sort of alternative financing such as crowdfunding or discuss a deal with people who don’t have resort operation experience.

Mollath said potential owners would need to be qualified to manage everything from ski lifts to the explosives used in avalanche control.

Without qualifications, “I can tell you what the Forest Service would tell us,” Mollath said. “No thanks.”

Potential buyers need to show the Forest Service they have sufficient capital to sustain the operation, which attracts more than 250,000 skiers and snowboarders annually. The ski area consists of 461 privately owned acres and 1,000 acres of property owned by the Forest Service and leased to the resort.

“We have to know they are financially sound and if they have the technical capabilities to run a ski resort,” said Erica Hupp, spokesperson for the Humboldt-Toiyabe National Forest. “There are a lot of specifics in those two categories.”

Davis, however, said Mt. Rose officials are overly optimistic when it comes to demand among traditional operators.

According to Davis if there were traditional operators willing to pay an amount Mt. Rose was willing to accept there would already be a deal in the works.

“Nobody who is out there who is a ski operator is going to want to buy this,” Davis said. “They are going to laugh.”

He touts his approach as a logical alternative that can rally sufficient capital to pay for the purchase while building community support for the added real estate development it’s going to take to make the investment pay off for buyers. Crowdfunding, he said, would represent a small fraction of the effort.

“I feel capable, not uniquely capable, but like I’m one of very few people who can actually get this kind of complicated thing done,” he said. Nationally, the ski industry is dominated by Vail Resorts, a publicly-traded company based in Broomfield, Colo., that operates mountain resorts worldwide, including Heavenly, Northstar and Kirkwood in the Lake Tahoe area.

In January when Mt. Rose owners announced plans to sell their property some of the most frequent, and loudest, responses came from the “anybody but Vail,” crowd.

And Vail isn’t the only resort operator viewed as a bogeyman in some corners of the local ski community.

There’s widespread, vocal opposition to a redevelopment plan by Squaw Valley Ski Holdings that would increase the number of condos, hotel rooms, retail and other amenities at historic Squaw Valley Resort.

Davis’ proposal so far is playing out in posts on the One Reno Facebook page.

The posts say One Reno is seeking debt partners, equity partners or even names of people willing to donate to a future crowdfunding campaign.

“This of course is in addition to the number of serious investors who are already on board,” a post on August 24 states.

Other posts seek to imbue the effort with a sense of urgency by raising the specter of “outside interests,” beating One Reno to the deal.

“Outside interests are also interested in buying the mountain, and we cannot let that happen,” an August 10 post states. “If you want to be involved at the ground floor, contact us right away.”

The earliest One Reno posts cropped up in early August and more recently picked up steam. An August 16 post gained nearly 300 shares and One Reno now has nearly 1,000 people following it for updates.

It’s no surprise promises of local ownership of a ski resort that’s just 25 minutes from Reno would generate enthusiasm. Nor that additional development could be a touchy subject.

One Reno seems to be marketing to ski-loving Reno locavores who would rally around plans to maintain Mt. Rose as a bulwark against the industry trends toward consolidation, non-local ownership and non-skiing or snowboarding resort amenities.

At Mt. Rose there are no hotel rooms or condominiums, retail is limited to a small gift shop in the lodge and food and beverage service amounts to what you can buy in cafeterias or the bar.

There is evidence at least some of the Facebook supporters of One Reno would prefer to keep it that way.

One commenter expressed support by saying Mt. Rose should remain a “ski area,” as opposed to becoming a full-blown resort.

Another was concerned about whether One Reno would move to, “block major future development.”

But when discussing the One Reno vision for the mountain Davis says real estate development would be critical to making the project work.

“There are specific improvements planned around expansion and development,” he said. “You can’t just buy the ski resort you have to buy the whole project.”

A Washoe County master plan says Mt. Rose could support development of up to 441 residential units.

“You could go in and buy the whole thing just for the real estate,” he said.

And he also said questions from Mt. Rose about his qualifications suggest he needs to redouble efforts to bring people with ski resort experience on board.

“That kind of experience is going to be important in the project,” Davis said.

He also said the One Reno Facebook page may have gotten ahead of itself characterizing progress of the plan, particularly the post about serious investors already being on board.

“That I think is probably a misstatement in terms of the project process,” Davis said. “We have had a lot of people indicate significant interest.”