At nearly 12,000 feet this remote peak is worth trek to central Nevada.

If you’re looking for a mountain adventure from Reno just look toward the Sierra Nevada. Then turn around.

Now you’re looking in the right direction, toward central Nevada’s towering Toiyabe and Toquima ranges just about 200 miles to the east.

And there are few better places to start than Mt. Jefferson, located in the Toquima range south of Austin and north of Tonopah.

At nearly 12,000-feet in elevation Mt. Jefferson is the fifth-highest peak in Nevada and provides a legitimate high-altitude experience.

But the peak’s location in central Nevada means peak-bagging here isn’t the same as a trip into the Sierra Nevada, and that’s a good thing.

For starters you don’t need a permit to hike, camp or cook at Mt. Jefferson, unlike many popular Sierra Nevada destinations.

That’s because there aren’t many people clamoring to visit the peak, even during midsummer weekends when the Sierra is swarming with California crowds.

In fact, once you leave paved roads near Austin you’re unlikely to see more than a few people on the remainder of the drive over roughly 70 miles of dirt.

We made the drive from Reno on a recent Friday afternoon with a plan to hike the peak Saturday morning.

I was traveling with Daniel Ellsworth, a Reno Hiking Meetup organizer, and the trip was our second attempt at the peak. Or previous trip on July 4 with a larger group got cut short when lightning forced us to turn around.

Camping at the trailhead. The Mt. Jefferson trailhead is at about 8,700 feet in elevation, that's Mt. Jefferson S. Summit in the background. Benjamin Spillman/RGJ
Fullscreen

Sunset from the Mt. Jefferson trailhead on Aug. 12, 2016. The Toiyabe range is on the far horizon. Benjamin Spillman/RGJ
Fullscreen

Mt. Jefferson, Nevada's fifth highest peak, on the morning of Aug. 13, 2016. The two-track marks the beginning of the hike to the top from the southern trailhead. Benjamin Spillman/RGJ
Fullscreen

The view of Mt. Jefferson's north summit from the south summit on Aug. 13, 2016. Benjamin Spillman/RGJ
Fullscreen

The official elevation at the top of Mt. Jefferson is 11,941 feet. But an iPhone puts the peak at 12,040 feet. Benjamin Spillman/RGJ
Fullscreen

On Aug. 13, 2016 there was still snow clinging to the south summit of Mt. Jefferson in Central Nevada. Benjamin Spillman/RGJ
Fullscreen

For the second attempt we decided to camp at the trailhead so we could head up early in the event of afternoon thunderstorms, which are common in the area and throughout the Great Basin.

We accessed the trailhead from Forest Service Road 010 which we took west starting from the Monitor Valley.

It’s about 10 miles from the valley floor to Jefferson Summit, elevation 8,771 feet, where we camped. Most of the road is drivable with a standard all-wheel-drive vehicle, but I’d recommend a high clearance 4x4 with burly, all-terrain tires if you want to make the final mile or so to the top.

We camped at the top of the pass where there are views of the Toiyabe range to the west and the Monitor Range and Table Mountain to the east. Looming in the north is the southernmost, and tallest, of the three Mt. Jefferson peaks.

The spot is the definition of accessible solitude. You can camp in or right next to your vehicle like you would in a convenient campground.

But unlike a campground there usually isn’t anyone else around. On Friday evening we saw just two other vehicles, each was a 4x4 with hunters scouting the area for deer and elk.

Sunset over the Toiyabe range as seen from Mt. Jefferson on Aug. 12, 2016. (Photo: Benjamin Spillman/RGJ)

To keep things simple (and to avoid using flames in a fire-prone area) we limited breakfast to cold snacks and cold coffee before heading out on the hike.

From the trailhead to the peak it’s about five miles of hiking with more than 3,300 feet of elevation gain.

The first couple miles are on a two-track that you could drive if you wanted cut down on distance hiked. We elected to walk it in part because between the tracks was tall, dried out grass that could have been a fire risk if exposed to the heat from the 4x4 exhaust.

Eventually the two-track becomes a single-track as you alternate between a series of ridges and plateaus.

There are several spots, particularly on the plateaus, where the single-track grows faint and becomes difficult to follow.

When that happens you can look for cairns along the route which will keep you on or close to the path. 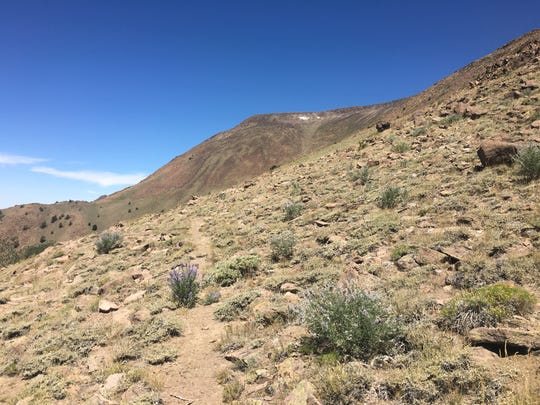 The trail generally goes directly north toward the peak until you reach the final ridge, which is essentially a huge talus pile.

Here the trail wraps around the east side to the north side of the peak before eventually going to the top.

If you get impatient following the trail you can just climb the talus and emerge at the top, although that option comes with additional risk from climbing over loose rocks in a remote location.

The top of the peak is actually a huge, flat plateau. There are scientific instruments powered by solar panels and some U.S. Geologic Survey markers.

While the devices didn’t agree with the map, there was no disputing the amazing views from the top.

It’s really a great place to understand the topography of the Great Basin. You can see the Monitor and Big Smoky valleys, the peaks of the Toquima, Toiyabe and Monitor ranges and many of the drainages where streams support lush vegetation surrounded by an ocean of arid desert.

You can also get a good view of the Pine Creek drainage, which goes down to the Pine Creek campground on the west side of the Monitor Valley. Some people choose to camp and hike from Pine Creek, which appeared to be a more sheltered route because of the trees but adds another 1,000 feet or more to the ascent.

After snacks and photos on the peak we returned by the same route and made it back to camp by 1:30, which meant our total hike time was about five hours and 45 minutes.

If you’re looking for a demanding hike and a true backcountry experience that doesn’t require a long weekend or battling California crowds consider turning your back on the Sierra Nevada and heading east to Central Nevada. This gorgeous hike is why you live in the Sierra Nevada

If you go: Mt. Jefferson hike

Warning: Mt. Jefferson is remote and the road to the southern trailhead is rugged. A 4x4 with high-clearance and AT tires is recommended. Also, there’s no water along the route or at the trailhead so bring plenty of your own. The route is also completely exposed to sun, wind and sudden storms. You’ll want full sun protection. And if there are any signs of a storm turn around immediately and seek shelter in your vehicle. Cellular service is weak to nonexistent. The closest gasoline and diesel is in Carvers or Austin, both of which are 50 miles or more by road.