One afternoon in 1959, Doug Clifford was walking down a hall at Portola Junior High School in El Cerrito, California, heading home after finishing classes, when he heard crazy sounds coming from the music room. 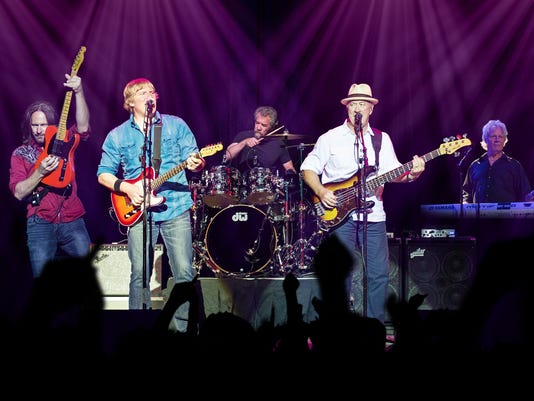 One afternoon in 1959, Doug Clifford was walking down a hall at Portola Junior High School in El Cerrito, California, heading home after finishing classes, when he heard crazy sounds coming from the music room. Someone was hammering rock ’n’ roll piano: Little Richard and Fats Domino — note for note, just like on the 45 rpm records Clifford bought and spun fanatically.

Poking his head inside, he discovered a skinny, brown-haired boy whaling on the keys. The outgoing Clifford praised the boy, a fellow eighth-grader, for his “authentic stuff,” then offered, “Do you wanna start a band?”

The boy, John Fogerty — shy but intense — said he would, and asked what instrument Clifford played.

“Drums,” said Clifford — who really owned just a snare and a cymbal.

They couldn’t have known that — a decade later — they would morph into the biggest rock band in the world in terms of record sales and concert draw: Creedence Clearwater Revival. Playing a swampy brew of melodic, stripped-down roots rock composed, arranged and produced by John Fogerty, and sung in his distinctively grainy, yowly baritone, he, Clifford and the other two —Cook on bass and Tom Fogerty on rhythm guitar — charted six straight platinum (million-selling) or multi-platinum albums from 1968 through 1970, along with 14 Top 40 songs — 12 which hit the Top 10, several which have become standards.

“Proud Mary.” “Bad Moon Rising.” “Who’ll Stop the Rain.” “Down on the Corner.” “Fortunate Son.” Spawned from Fogerty’s musicologist passion for the proto-rock of Little Richard, gospel blues of Ray Charles, honkytonk of Hank Williams, folk of Woody Guthrie and parlor songs of Stephen Foster, they remain staples of classic-rock and oldies radio formats, as well as chestnuts in karaoke songbooks.

But little did CCR’s members know that, just two years after skyrocketing to the top, their band would explode in a bitter breakup. If there is a happy ending, it’s that CCR’s music has stalwartly endured — embraced by each new generation of rock lovers. And while John Fogerty has pursued a solo career — his post-CCR hits include a No. 10, “The Old Man Down the Road,” and a No. 20, “Rock and Roll Girls” — both in the 1980s, the two remaining ex-members — Clifford and Cook (Tom Fogerty passed in 1990) — are now in their 23rd year in Creedence Clearwater Revisited, which continually tours to packed casino showrooms and has even scored a platinum album of its own with “Recollection”: a double-disc live album of CCR songs.

Creedence Clearwater Revisited brings its show to the Grand Sierra Resort’s Grand Theatre on March 3. Fronting the Clifford-Cook rhythm section are lead guitarist Kurt Griffey (who’s been a sideman with latter-day versions of the Moody Blues and Lynyrd Skynyrd), and Dan McGuinness on lead vocals and rhythm guitar. A fifth member, multi-instrumentalist Steve Gunner, performs the keyboard, saxophone, harmonica and other parts that were CCR overdubs in the studio, to replicate the sound of the records.

The 100-minute set will include the biggest CCR hits, as well as some of the lesser ones (such as “Lodi” and “Susie Q”), and album tracks (such as “Born on the Bayou”) that nonetheless are familiar even to casual fans.

Clifford and Cook, now grandfathers in their early 70s, are content with bringing the CCR songs to live audiences their way.

Clifford, who raised three children at Lake Tahoe and now lives with his wife in Reno, spoke with Best Bets before the GSR show.

BEST BETS: When you and Stu launched Creedence Clearwater Revisited, how long did you expect the act would last?

CLIFFORD: We had a five-year plan. We didn’t know how it would go over, if we could put together the right personnel. And here we are, 23 years later. That five years has stretched quite a bit.

CLIFFORD: It’s a combination of things. The fact we started out when we were 13, as a recording unit — Tom Fogerty got us into the studio — and as an instrumental trio when Tom wasn’t around, we were learning to play our instruments and to be recording artists at the same time. It gave us a uniqueness as far as our sound goes. The genre of music was always the same. We practiced roots American music, and that was our thing. We came out of San Francisco in the middle of psychedelia, and our peers laughed at us, called us “the Boy Scouts of rock ’n’ roll” because we weren’t doing drugs with them or doing endless jams like them which, when you boiled them down, were really pretty boring. We were different, and we had a different sound that allows us to still sound fresh. It’s doesn’t sound like a band from that period of time. And we had good songs. John Fogerty was a brilliant songwriter, and we had sort of a collective way of doing things, jams, when we were looking for material. So we showed up to work straight and sober every day. Once the songs were written, we’d work on that material until it was time to record. When we went into a studio, we didn’t go in with 15 songs and pick the best 10. We went in with the album in its exact order, and did the recordings.

BEST BETS: Although John Fogerty was solely credited as their writer, it seems a lot of CCR hits evolved out of the jams on the songs in their formation period, that all of you contributed to.

CLIFFORD: That’s true. And he would never give us credit for it. And in his book, he slaughtered us as people and as musicians. It’s really sad that he has this attitude, and it doesn’t get better with age. You just kind of shake your head and go, “We had this dream as kids, and we pulled it off. We should be drinking champagne and celebrating a great accomplishment.” But we had 17, 18 hits in a three-and-a-half-year period. And once he got rid of the guys that were “holding him back,” he had two hits in 40 years as a solo artist. I think all of us, as a unit, brought something to the table. It’s unfortunate. I wish we were friends, and all of those things that we should be.

BEST BETS: You’re turning 72 in April. How, as a rock ’n’ roll drummer, do you improve over the years? Is it like being a blues artist, where you wish you had the chops then that you do now?

CLIFFORD: Physically, when I was 24 years old, I played a little bit different style. I was trying to break things. Now I have dynamics. You figure out over time, you make subtle changes here and there, to be able to keep in the race. I use dynamics more than I used to. The joke on that one is, “‘Dynamics’? What do you mean? I’m playing as loud as I can.”

BEST BETS: What odds are there for you guys and John Fogerty to get back together again on stage?

CLIFFORD: In my mind, zero. I love the guys I’m playing with right now. And Stu and I have been buddies now for 58 years. It would’ve been great 20 plus years ago, then it would have made a lot of sense. But things are just not good, and to play music together, you have to get along. We were fortunate that we had the success that we did. But we did work hard and had a work ethic. And it took 10 years, and we stuck to it. The good news in all of it is there’s this wonderful legacy of music, and that’s what I’ll hang my hat on. We have more young fans now than older fans, over three generations. It continues. It’s a very grass-rootsy thing. Most of it comes from families — siblings, parents, grandparents, passing it on. That’s pretty cool, because different generations generally don’t like each other’s music. We’ve bridged that. And I see a fourth generation coming on. I call them “single digiters”: 7-, 8-, 9-year-olds. We accomplished our artistic goals as artists, maybe not as people. That part’s unfortunate. But something beautiful came of it. It’s enduring. And the test of time is the ultimate test. We’ve affected millions of people’s lives, people who don’t even speak English love what we do.