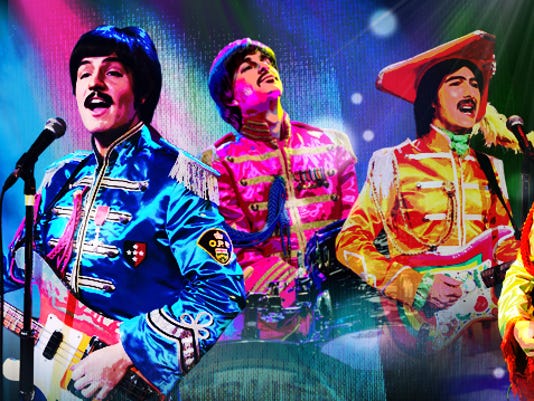 Rain, a tribute to the Beatles, comes to the Grand Theatre on Feb. 24.(Photo: Provided to the RGJ)

But those reasons, which included personal issues and technological limitations, won’t hinder the nationally touring Beatles tribute act, Rain, when it performs the album in its entirety at 8 p.m. Feb. 24 in the Grand Sierra Resort’s Grand Theatre.

“We’re celebrating the 50th anniversary of the greatest album ever made,” said Paul Curatolo, who plays Paul McCartney’s musical parts and looks the part, during a recent phone interview. “We’ve only recently gotten the technology to be able to really play it authentically. It’s incredible having all the one-of-a-kind sounds. That portion of the (90-minute) show is going to play as if you put a needle to the record, but it’s still a live experience. It’s still a show. It’s still a concert. But visually, it’s going to look like the album cover come to life before your eyes.”

The psychedelic and highly colorful album cover featured the Beatles members dressed in military-style uniforms while portraying the fictional Sgt. Pepper’s Lonely Hearts Club Band whilst surrounded by a collage of famous people.

The album in 2003 topped Rolling Stone Magazine’s “500 Greatest Albums of All Time” list. It won four Grammy Awards in 1968, including Album of the Year.

“That album just did something to you,” Curatolo said. “It took you on this adventure, this journey. If you just lay back and shut your eyes and let each song take you away, you were frankly exhausted by the end of it because it took you so many places.”

Now, Curatolo and his Rain bandmates will be the guides leading audiences on this musical expedition. The show features several giant LED screens that enhance the concert with videos that show stories relating to the songs.

“We can’t wait,” said Curatolo. “We’ve all kind of geeked out on this album. For us to be able to honor it and celebrate it is just incredible. We can’t wait to get out there and play it.”

A copy of the Beatles, "Sgt Peppers Lonely Hearts Club Band" album is held by a listener in London in 2007. (Photo: CHRIS YOUNG/AFP/Getty Images)

Having Beyer on stage playing the auxiliary sounds, piano parts and keyboards is integral to re-creating the original Beatles sound as precisely as possible, Curatolo said. The band played and recorded samples that Beyer can use during the show.

“Everything you see and hear is performed live,” Curatolo said. “We’re not hiding a thing. Mark’s right there the whole time and you can see what he’s doing. That extra noise that’s filling the album up is coming from him.”

Rain is widely considered to be the most highly respected and longest-running Beatles tribute act in the world. The band started as Reign in 1975 in Southern California playing originals and Beatles covers. Founding member and keyboardist Mark Lewis remains with the band as its manager.

By 1980, the band changed its name to Rain and became a full-time Beatles touring tribute act. It became known for its exacting live concert note-for-note replication of the Beatles’ studio music. Rain has performed globally since, including runs in London’s West End and playing more than 300 shows on Broadway.

A near-original member is Joey Curatolo, Paul’s father, who joined Rain in 1978 and also played the parts of McCartney. The younger Curatolo, while born in Los Angeles, was raised in Reno and is a graduate of Galena High School.

“As a child, it (Beatles music) was always playing,” Paul said. “While most kids remember the dad’s favorite football team on TV as a toddler, I remember the Sgt. Pepper’s outfits, the guitars and the sounds of music. Since I could live and breathe it’s been all around me. It’s all I know.”

Still, Paul didn’t entertain following in his father’s footsteps out into the Rain. In fact, he was involved for many years in the local pop-rock group, Wayward, along with Chiazza, who was raised in Carson City.

“One day my father and I were working stuff out musically when he just asked me if I’d be interested in doing this,” Curatolo said. “I chuckled it off for a second, then asked, ‘You think I could do this?’ Flash forward five years later and here we are, and I’m so thankful for the opportunity because it took me into hyper-speed musically. I went from drumming in a pop-rock band to playing just about every instrument and really learning music theory through the very best.”

Curatolo even plays the bass upside-down to replicate McCartney’s style.

“Paul McCartney is famously left-handed and so one of the most authentic ways to really get the Beatles appearance and look from afar, and even up close, is flipping your instrument upside down. At first it seemed very difficult, but now it comes second nature and I can actually play left-handed. I can’t imagine going back (to playing right-handed).”

The Reno show is one of about 100 shows that Rain will play in a 10-week period, an average of more than one show daily, Curatolo said. And he wouldn’t have it any other way.

“It’s an incredible honor, and I don’t even like saying I’m acting as Paul McCartney,” he said. “I’m just a super fan that’s paying tribute to him every night, paying tribute to his legacy and his music and if word ever got out, I’d just want him to know that we’re all fans first. All of us on stage, we’re fans just like everybody in the audience.”