Styx vocalist still the ‘new guy’ on the block

Lawrence Gowan has been the “new guy” in Styx for close to the length of service of the “old guy.” As it happens, this keyboardist and vocalist for the classic progressive rock band doesn’t see it as disrespect.

Styx vocalist still the ‘new guy’ on the block

Lawrence Gowan has been the “new guy” in Styx for close to the length of service of the “old guy.” As it happens, this keyboardist and vocalist for the classic progressive rock band doesn’t see it as disrespect.

“I do like wearing the badge of the new guy, and I want to hang on to that for another few decades if possible,” Gowan said with a hearty laugh during an interview from Las Vegas, where the band has its first residency in January.

“Let me put it this way: the greatest compliment I receive from someone is when someone says, ‘I was at the Paradise tour in 1981 and man that show was great, but tonight was as good if not better.’ Nothing makes me happier than that, for them to see the continuation and continuity in how the band has gone on.”

Gowan’s vocal and keyboard work on classics such as “Come Sail Away” and “Lady” — just two of the hits sung by previous Styx member Dennis DeYoung — are likely to be featured as part of the band’s show on Jan. 20 at Silver Legacy. Joining the band in 1999, he said he understands how some people will always like a certain band member. He used the example of Ron Wood replacing Mick Taylor of the Rolling Stones as an example of when it works, though.

“Ron Wood is the third guitarist in that band, but it feels like he’s been there all along,” he said. “It’s like he stepped onto the stage later in the movie. It’s the authentic spirit of a band and it being underpinned by drama that they have to overcome. I like to feel that’s the case for Styx, and there are those that would agree and some that would vehemently disagree, but that’s the beauty of how subjective this can all be.” 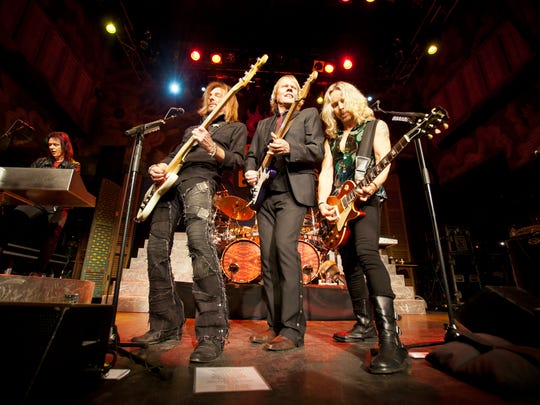 Success from the Midwest

The first time Styx earned a huge chunk of fans was with “Lady,” a dramatic rock ballad that reached the top 10 in 1975. It was from the Chicago band’s “Styx II” album in 1973 and took the two years to reach that mark. From the band’s 1971 start through to then, it was all about relentless touring in the Midwest, but that broke open when the group signed to major label A&M later in 1975.

From there, the band scored hit albums, singles and international tours. Its commercial peak was from 1977 to 1983, with big hits such as “Come Sail Away,” “Blue Collar Man (Long Nights),” “Renegade,” “Babe,” “Too Much Time on My Hands” and “Mr. Roboto.”

The group’s first split was in 1984, when everyone pursed solo careers or in the case of Tommy Shaw, a role in the melodic hard rock band Damn Yankees. A reunion in 1990 spawned a huge hit with “Show Me The Way,” but the band broke up and reformed several times during the ’90s. Things stabilized toward the end of that decade, which is when Gowan replaced DeYoung.

So far, Gowan has been featured on two Styx albums from the early ’00s as well as two EPs released in 2010 and 2011 called “Regeneration,” which have re-recorded versions of Styx classics.

Gowan said that giving up his own popular band in Canada in 1999, which was named Gowan, was not an issue to him.

“It was one of the easiest decisions I had to make in my life,” he said. “But on the other hand, it was the most difficult when I had a 14-year career. It’s not that cut-and-dried, that I could just say, ‘Yes, that’s enough of that and now I’m going to join this legendary band.’ But, there was such an excitement to it and also the reality that in order for me to sustain a career, I would need to expand and grow. There has to be some kind of Act II.

“At some point, it normally goes that you form a band and then you become a solo artist, and I happened to do that backwards. That’s just in my nature, (laughs) but I did see it as very exciting and viable and, not to sound immodest, but achievable. I’ve really loved it and it was definitely an honor to be asked and I want to make sure they don’t regret it. And, here we are — 18 years later.” At their live shows, the group expands beyond the regular hits to feature album tracks that it’s noticed do well on the live stage. One deeper cut for he band that has become what Gowan called a “standard in the show” is “Man in the Wilderness” from the album, “The Grand Illusion.” For himself, he singled out the title track to their “Pieces of Eight” album.

“Lyrically, it really holds up and it has a great depth of meaning and timelessness to it,” Gowan said. “Some of our songs are inundated with the same radio play that the rest of us heard when they were originally out, and I think that’s why some of the younger people, that are under 30, are putting those high on their list.”

One thing the band hasn’t done, though, is release many new songs in the past decade-plus. Gowan said that it does surprise people he knows as well as fans when he tells them that the band still writes songs regularly, but the reality is that there roadblocks with the way the music industry is now to putting out your own material.

“We just haven’t found the perfect time to release and properly promote a new record, and if we particularly don’t do that second thing, there’s no point to it,” Gowan said. “Now, it could happen even sooner than we think. We do have quite a bit of stuff and we just need the time to focus and direct enough energy to that kind of endeavor. I’ll put it this way: it will happen, but it’s just not imminent.”