Blue Oyster Cult has longevity going for it

Finding enduring fame in rock and roll can be elusive, but it’s well assured for the members of Blue Oyster Cult.

Blue Oyster Cult has longevity going for it 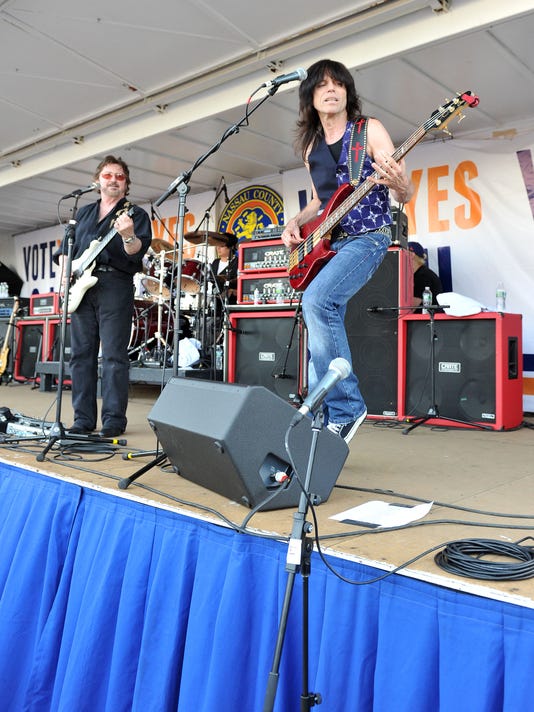 Finding enduring fame in rock and roll can be elusive, but it’s well assured for the members of Blue Oyster Cult. That longevity is something that Eric Bloom, an original guitarist and singer with the group, has noticed in recent days.

“Yesterday, I saw a picture of Metallica in the ‘New York Times,’ in a story about their new album, and there’s (guitarist/singer) James Hetfield in a Blue Oyster Cult T-shirt,” Bloom said during an interview in November from his home in Florida. “It’s nice to know that other people like us. Even kids in high school still like our stuff.”

BOC’s loyal audience in this area likely will flock to their latest show in the area, Dec. 17 at Harrah’s Lake Tahoe. Bloom acknowledged that most people who see the band these days like their early material, but he said the band tries to keep the set fresh for the audience as well as themselves.

“I’ll call an audible on a regular basis if I get a certain vibe,” Bloom said. “We do have a hardcore following like any other band. Sometimes, they get very upset if you lean too much on some songs: ‘Hey, you guys are playing the same seven songs!’ Well, yeah, because 97 percent of the people here haven’t seen us lately, but maybe you eight guys have.”

The band certainly has a lot to music from which to choose, some of it dating back to when the band’s two founders — Bloom and fellow guitarist Donald “Buck Dharma” Roeser — began the group. As for the others now in BOC, keyboardist and guitarist Richie Castellano played with the group since 2007, while drummer Jules Radino has been with BOC since 2014. The group’s newest member is Kasim Sulton on bass, also known for his past work with Todd Rundgren and Utopia. He joined the band in 2012.

“Kasim’s been great,” Bloom said. “He’s a great singer and his bass playing’s terrific, and we appreciate his history and everything else about him.”

Cities on flame with rock and roll

Blue Oyster Cult has its origins in the New York band Soft White Underbelly in the late ’60s. Both groups were formed with help from the late Sandy Pearlman, a recording engineer and manager who wrote some of the group’s early lyrics and produced their biggest early hits. After being signed to Columbia Records in 1971, BOC released four albums in quick succession and toured relentlessly.

Its best-known songs from this era were “Astronomy,” “Cites on Flame with Rock and Roll,” and “The Red and the Black,” which was later covered, surprisingly for some, by punk rock bands Minutemen and Firehose.

Blue Oyster Cult’s breakthrough was the album “Agents of Fortune,” in 1976. It went platinum and featured “(Don’t Fear) The Reaper,” still a staple on classic rock radio. From there, the band had other hit albums and songs that earned radio play, including “Godzilla,” “In Thee,” “Black Blade,” “Burnin’ For You” and “Take Me Away.”

One thing that makes BOC distinctive is its use of lyrical collaborators. Among those who have contributed to the group are authors Hunter S. Thompson, Richard Meltzer and John Shirley. Musicians such as Patti Smith, Ian Hunter and Aldo Nova also had a hand in some songwriting. Bloom said the band has always been open to artists offering lyrics.

“You’ve got to remember the genesis of the band,” Bloom said. “We had a writer who lived in our band house and that was Richard Meltzer, and Sandy Perlman always had his lyrics sitting on a cabinet for us to use. That was from the earliest days in the band.”

Since the late ’80s, BOC has been known more as a live act, playing what Bloom said is around 70 to 80 shows a year. The group’s last studio album was “Curse of the Hidden Mirror” in 2001.

Bloom said the changes in the music industry have influenced the band’s decision to not put out a new studio album, although he did say they were currently negotiating a record deal and that everyone is still writing songs.

“We do make our living on tour,” he said. “If we put a record out, it’s really only the hardcore fans who care. And, as an economic piece, you know it takes months and months to make a record and you are taking time off from the road and you have to recoup that.

“I’m sure there are a lot of bands who may disagree with that and say they want to do it for the art, you know, but it’s difficult. There is classic rock radio, but they wouldn’t play it because it’s new. And other radio stations won’t play it because we’re old. It’s kind of a Catch-22.”

There is an interesting new item available this year. Blue Oyster Cult recently hosted a concert broadcast on DirecTV, and it’s still available on the satellite company’s website for subscribers to view. Bloom said, “Down the road, it will eventually revert to our own ownership, so that’s something we’ll have in our hands and release in some fashion.”

The DirecTV concert featured the band playing “Agents of Fortune” in its entirety, marking its 40th anniversary. The show included Albert Bouchard, the former drummer of the group, and was a part of four “Agents” concerts staged in New York, Dublin, London and Los Angeles (the L.A. show was the broadcasted one). Songs on “Agents” sung by the band’s late keyboardist/guitarist Allen Lanier were sung by Roeser instead.

Bloom said it was a good experience, although daunting for him.

“I had to jog the memory a little bit,” he said. “Eighty percent of that material we haven’t played in a long time. I had actually forgotten who sang some of the stuff. Plus, there were the songs that Allen sang. So, we had to modify and pull together and find some way of presenting it.”