Anjelah Johnson is back in Reno this week, but this time she’s staying out of trouble. 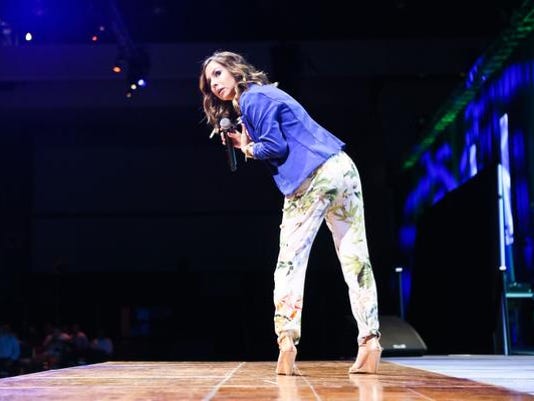 Anjelah Johnson is back in Reno this week, but this time she’s staying out of trouble.

“I grew up going to Reno because my grandmother lived there,” the comedian and actress said last week at home in Los Angeles. “So, we would go out there every year and go to Circus Circus. Then, as I got older and I started hanging out with the wrong crowd and I started being a little tough girl, we’d go to Circus Circus just to hang out and loiter and get ourselves into trouble. So, I’ve gone there as a child, I’ve gone back as a teenager to be a little hoodlum and I’ve gone back as an adult to do my shows.”

Johnson, who shot to prominence in 2007 with “Nail Salon,” a fan-posted clip of her nascent standup routine that has since been viewed more than 35 million times on YouTube, appears at 8 p.m. Friday at the Silver Legacy Resort Casino.

The San Jose, California, native came to her observational, character-driven comedy in 2007 as a loosely planned avenue into acting. She had been an Oakland Raiders cheerleader, and was looking to make her way south to try her luck in Hollywood. She had taken a joke-writing class at her church, which culminated with a performance. Her keenly rendered nail salon employee, Tammy, was the star of the first bit she wrote. With just a few minutes of material written, she began to make the rounds at local comedy clubs.

Then the dam broke.

After just a handful of performances, her “Nail Salon” routine became an overnight YouTube sensation, leading directly to a role on Fox’s MAD Tv in 2008. It’s been a steady ascent ever since for the 34-year-old Johnson with a nearly constant calendar of appearances all over the country and as far afield as Canada, Guam, Saipan and Australia.

“I’m kind of just always on tour, for my whole life,” she said.

The international audiences have been enthusiastic, but adjustments have had to be made.

“They don’t have Target in Canada, so that whole joke [fell flat]. How do you have life without Target?” she kidded. “Animals! Pure animals!”

It was while a cast member of MAD Tv that she created what has become her signature character, “Bon Qui Qui,” a ghetto fabulous retail employee with a questionable work ethic. Bon Qui Qui’s “King Burger” clip has logged an astounding 72 million views since its 2008 debut, and has spawned two albums of in-character music and even an ugly Christmas sweater.

Johnson relies on a conversational kinship with her audiences as she mines her personal life for situations and relationships ripe for comedic exploration.

“People say, ‘Oh my god, my husband does that, too!’ I like to relate to people that way. And I’ll share stories of my life that are funny. For instance, I got a massage, and my massage therapist fell asleep while giving me a massage. It’s weird things like that that you just have to share. You can’t keep that story to yourself!”

Those type of personal stories are the bedrock of her act. And with that kind of well from which to draw on, she is happy to leave current events and political commentary to other comedians.

“The election, and where our country is has not changed my show,” Johnson said. “Because my purpose and my goal is to bring joy where I’m going and to connect with people and to relate to people. And so I don’t want to talk about what we’re already getting enough of in our Facebook feeds, our Instagram feeds and our conversations with family and friends that we may not agree with. I want my show to be like a break from all of that, a nice little getaway to just relax, have fun, laugh and enjoy the other parts of life that don’t have anything to do with the election or the state of our country.”

Touring has afforded Johnson an expansive view of the U.S.

“I feel like I’ve always had a huge, diverse fan base,” she said. “Since the ‘Nail Salon’ video first came out, it’s always been diverse. I am Latina, but my jokes are not just for Latinas.”

No matter where she is, fans she encounters know her life is the basis for much of her material.

“It’s funny because everywhere I go people think they’re going to end up in my act, even if they don’t do anything funny. If somebody recognizes me and just asks me for a picture, then they’ll go ‘Don’t go putting me in your act now!’ And I’ll say, ‘OK, I won’t.’ Ha!”

Her long-term goal has always been film acting, and she’ll reach a milestone on that quest in January when WWE Studios releases “The Resurrection of Gavin Stone,” a faith-based comedy and the first feature film starring role for Johnson.

The film is yet another step in a career that went from zero to hyper speed in about two months, and has not let up since.

“I’m super excited about [The Resurrection of Gavin Stone],” she said. “I hope people enjoy it.”

And as she strives to expand her acting chops, she continues to tour with her standup act, take voiceover parts in animated films (“Alvin and the Chipmunks: the Squeakquel,” “Marmaduke,” “The Book of Life”), promote her Bon Qui Qui musical offshoot (2015’s “Gold Plated Dreams” and the just released EP, “Merry Hoodmas”) and do commercial work as well.

“There are constantly little projects here and there,” Johnson said before she headed off to the airport to fly off to her next appearance. “But the payoff is amazing, to be able to see people enjoy themselves and have a great time. That makes it all worth it, to be honest.”