90 events and counting on tap for Reno Craft Beer Week

Close to 40 events are on tap for the second annual Reno Craft Beer Week May 13-22.

90 events and counting on tap for Reno Craft Beer Week 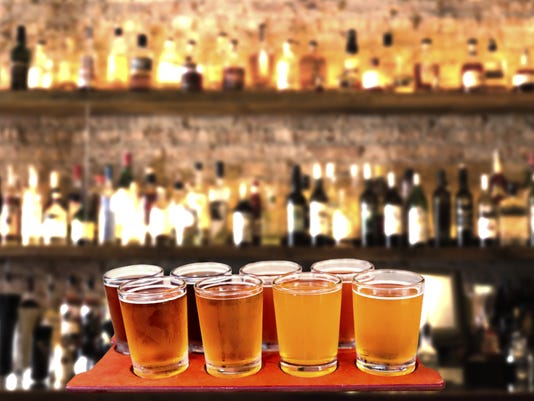 90 events and counting are on tap for the second annual Reno Craft Beer Week May 13-22. Patrons will get to sample the area's finest beers and learn from local beer makers about their evolving craft.

Six of the events benefit local charities including the SPCA of Nevada, Project Great Outdoors, the Reno Rebuild Project, Keep Truckee Meadows Beautiful, Oskar Blues Can'd Aid Foundation and the Nevada Humane Society. It will be an eclectic feast: home brews, visiting craft beers from all over the country, strange brews from closer to home, beer and bites, local chefs matching their beer creations with their food insights, a sour-fest beer tasting, beer cocktail demonstrations, beer brunches, a beer crawl at a ballpark and beer festivals that benefit good causes.

Here's a sample. Get the full event list here.

Backwash, a celebration of hops and hopes is a showcase of the very best homebrew the West has to offer. Featuring nearly 100 truly one-of-a-kind beers. You have never tasted them before, and with the exception of the winner, who’s beer will be brewed by and featured on tap at The Silver Peak. Backwash is a fundraiser for Project Great Outdoors, a non-profit organization that works to improve the lives of under-served and under-resourced young people in our community, guiding them toward broader perspectives and self-discovery through adventures in the great outdoors.

Join us at The Depot for bottomless Ranch Hand American Ale (Mimosas too) and bottomless brunch appetizers. We will have the music blasting and the patio games set up, so come on down for a true Sunday Funday. RCBW VIPs get any beer for their bottomless selection.

Sacramento-based Track 7 Brewing Co. will make a stop at Beer NV for a night of beer, food and fun. A local food truck will be on site as well, providing fare for guests. A portion of the evenings proceeds will be donated to Nevada Land Trust.

Beck’s Brew House keeps it local with a Blind Onion Pizza/Great Basin Brewing Co. paring. A full lineup from the godfather of local craft beers and the sublime and sometimes crazy (in a good way) combos from a local fave, and next-door neighbor, Blind Onion.

Sausagefest at the Tap Room featuring the Brewer’s Cabinet

Beer and sausage, the go-to combo every grill hound falls back on. The Whole Foods Tap Room is doing us a favor with $6 made right here sausage plates and $4 beers featuring local favorite Brewer’s Cabinet.

Charmingly located on the Truckee River, Sierra Tap House opened its doors in 2006 during the Downtown River Festival. Nearly 10 years later, the owners will celebrate its success in the biggest little city. Refreshments provided by The Jungle. Complimentary tastings by Sierra Nevada Brewing Company.

Eat, Drink, and be (Clint) Jolly

Chef Clint Jolly of Great Thyme Catering, and Food Network fame, will thrill the palate with fun and unique appetizers and small bites paired with our feature brewer, New Glory Craft Brewery. A portion of ticket sales will benefit the Food Bank of Northern Nevada.

Join Captain Larsen and the Chapel crew as we take a rocket ship to the High Gravity atmosphere of Jupiter with Doubles, Imperials, Barley Wines and Barrel Aged this and that from Reno locals plus a few out-of-towners. Buckle up and tighten your laces. This will be one hell of a ride.

Join us for the inaugural Reno Aces Pub Crawl when the Reno Aces host the Omaha Storm Chasers. For only $21, you’ll get a ticket to the game, participation in the Pub Crawl including five stops of brew samplers, voucher for food and beer and a Reno Aces Beer Stein.

Five delectable courses, like smoked ham hocks with Roasters Coffee Stout, prepared by the Peppermill’s Executive Chef Mark Lund, will be sublimely paired with beers from the Brewer's Cabinet and served in the luxury confines of the White Orchid Dining Room.

Great Basin Brewing Co. will be taking over five taps at SixFour Growlers with Icky five ways. Sample the benchmark IPAs from one of our longest-running, most award-winning local breweries. Growler Hour pricing during the event. That's $2 off 64 ounce fills, $1 off 32 ounce fills and $1 off pints.

Hops & Hounds: A Benefit for the SPCA of Northern Nevada

A tasting to benefit the SPCA at the Sands Regency will feature over a dozen craft brewers from throughout the nation along with several craft ciders. The SPCA of Northern Nevada is celebrating 18 years of bringing people and pets together.

Name that IPA. A Blind Tasting of 12 Sierra Nevada IPAs. Name all 12 IPAs correctly and be entered in a raffle for a chance to win a VIP BEER GEEK TOUR at Sierra Nevada Brewing Co.

Virginia City heats up with Chili on the Comstock

Coronado brings some So Cal beers and vibes to help you relax on a sunny Saturday afternoon. A la carte tacos will be available, so kick back and enjoy the day. A portion of the afternoon’s sales will benefit Veterans Guest House.

“Pa, Nicole has the dysentery.” Brave the challenges of Mid Town’s finest alleys during our annual Ale Trail. Work your way to the new frontier while drinking the region's finest ales and lagers. But stay on your toes, because the challenges of life in the West have come up a notch this year

You Had Me at Beer Fest

The inaugural You Had Me at Beer Fest will close out Beer Week with local brewers, food trucks, live music and four hours to reflect on the past week’s activities. Includes a meal voucher for a food truck or $10 toward vittles at Great Basin Brewing Co. The $40 pre-sale will be available here. Day of tickets are $50.