Reno got you drunk, now let the Biggest Little City lead you back to sobriety

You can’t take back your late-night decisions. You can fix the hangover. Here’s how.

Reno got you drunk, now let the Biggest Little City lead you back to sobriety 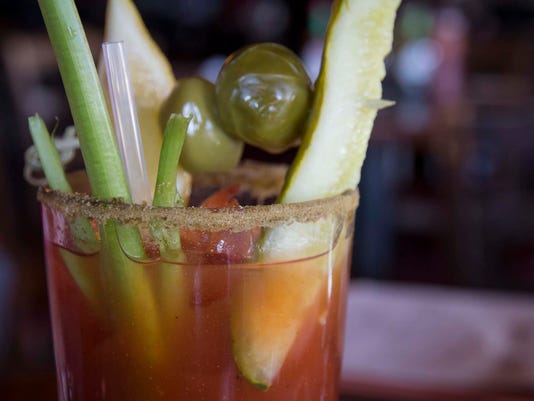 Sometimes, all you need to rebound after a night of drinking is a good Bloody Mary. Luckily, if you’re a casino visitor, chances are you don’t even have to leave the premises to find the right medicine.(Photo: Getty Images, Getty Images/iStockphoto)

So, you got drunk last night.

Except you didn’t just get a buzz going, you ran into friends at the Little Waldorf Saloon and went ham, your river walk got a little too real, the cover band at Brew Brothers was killing it and you just wanted to dance or you’re one of those weird “No rugrats/YOLO/We go hard” Millenials who wears your vomit-covered tank like a badge of honor.

Maybe you know where your pants are, maybe you don’t, but that doesn’t matter. You’re in a world of disarray caused by a splitting, mind-numbing headache and a constant concern you might vomit. That’s right, you’re hungover.

Not to worry, though, for within the sickness lies the cure. While Reno may seem like some evil temptress luring you into the crisp fall night with promises of glory only to leave you shattered and forsaken, the Dusty Dirty (as a homeless man once called it) is really more like that buddy who always means well but can’t seem to stay away from misadventure. His poor decision-making will you get you in trouble. Hell, maybe even arrested. But he’ll also give you some of the best memories of your life and he’s the first one to offer help when you’re in need.

Everyone knows that guy. Everyone loves that guy.

Reno is that guy.

Here’s a little knowledge bomb all the forward thinking drinkers out there already know: the best cure for a hangover is avoiding them in the first place. And while hangovers are awful, they’re definitely not Awful Awful.

Your biggest ally in the fight against being useless Sunday is that cheapest, greasiest, most delicious of Reno institutions. So before you head home, make a stop at the Little Nugget for a double cheeseburger and a pile of fries. People travel from all over the world for them. Seriously.

And remember, if you’re not walking down an alley in the wee hours of the morning, you aren’t doing it right. Scarf that hamburger down, add two Excedrin Migraine, generously apply water and watch your friends marvel at how functional you are the next day.

If you fail to execute your preemptive strike on Hangoverville, hope is not lost. When you wake up shaky, pained and nauseated, nothing beats a cup of coffee and stomach full of amazingness to absorb the alcohol. Talk to a group of native Renoites about their favorite breakfast/brunch/who-are-you-kidding-it’s-3 p.m. haunts and you’ll probably get several excellent options, but perhaps the best is Reno’s native breakfast darling: Peg’s Glorified Ham N Eggs.

Maybe’s it’s not Reno’s biggest little secret anymore, but there’s a reason for that. Once labeled as the “Best Breakfast in America” by Esquire Magazine, Peg’s legend equals that of the Awful Awful and now has five locations in Northern Nevada. Pick the nearest and send that hangover on its way.

Hair of the dog

Of course, some folks prefer that centuries-old solution of solving the problem with the very thing that caused it. You can read about the science here, but sometimes all you need to rebound after a night of drinking is a good Bloody Mary.

For those ready to get back on the horse that bit you, or bucked you or whatever, grab a bloody, find a sports book and catch some football while your body recovers.

Lake Tahoe is the solution of choice for most Renoites’ life problems and hangovers are no exception. Head to the lake, submerse yourself in Tahoe’s cold, restorative waters to get your adrenaline pumping and head to the Hard Rock  or McP’s Taphouse  for food, drink and football.
And, of course, the beautiful view.

And ode to the traditionalist

Of course, you could also just revel in last night’s excellence by putting on your favorite quitters (sweats), popping a couple aforementioned Excedrin Migraine, ordering a pizza, lying on your couch and putting on “The Big Lebowski.”.