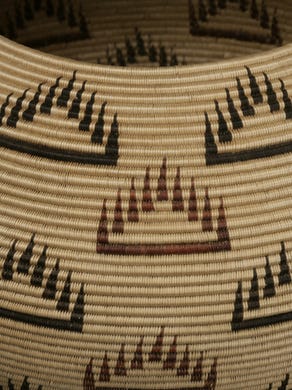 Thomas Hill, Fishing on a Stream near Mount Tallac, circa 1873, Oil on paper mounted on canvas, 15 x 21 ½ inches, Private Collection Courtesy of the Nevada Museum of Art
Fullscreen

Edwin Deakin, Tallac, 1895, Oil on canvas laid down on board, 12 x 8 inches, Collection of Barry K. Tagawa Courtesy of the Nevada Museum of Art
Fullscreen

Everyone loves Lake Tahoe. The beautiful scenery, clear blue water, and abundance of outdoor activities make it a must visit destination for many people. What most people don't know is that there is a rich and storied history behind the popular vacation spot. A new exhibit at the Nevada Museum of Art will give visitors a never before seen visual experience of Lake Tahoe, Donner Pass, and the surrounding Sierra region. This exhibit, Tahoe: A Visual History, is the largest, most comprehensive gathering of art related to the lake and will be spread among all 15,000 square feet of the museum. According to Amanda Horn, the museum's director of communications, it's a "200 year history of cultural production at Lake Tahoe."

Visitors to the exhibit, which opens August 22, 2015, will be blown away by the artifacts and art gathered together in one space. The exhibit is a careful blend of art from the 19th century through contemporary times. The exhibit starts with the native basketry of Tahoe, from artists like Louisa Keyser, who was known for taking the art of basket weaving to the next level and making it a truly beloved art form among the Washoe people. There are maps and journals from people like John C. Fremont and John Muir. This is just a small sampling of what will be on view. The various sub-exhibits within the larger visual history of Lake Tahoe are organized such that early art is juxtaposed with more contemporary pieces.

Ann Wolfe, senior curator and deputy director at the museum, spent five years curating the exhibit and believes it does a good job defining the cultural identity of Lake Tahoe and the surrounding area.

"Art produced in and about a place helps define its cultural identity," Wolfe said. "Without knowledge or shared understanding of a region's art and history, it is impossible to celebrate or critically examine its contributions to the broader culture."

Among the exhibit's stand out pieces is a painting by Albert Bierstadt called Donner Lake from the Summit. This 10 foot by six foot painting was commissioned by Collis Potter Huntington, the railroad baron who built the Central Pacific Railroad. However, when Huntington received the painting, he ended up not being terribly fond of it, and so had it shipped to New York City. This ended up being rather fortunate because his San Francisco mansion was devastated in a fire, and if the painting had been hanging there, as was planned, it wouldn't be shown at the museum today. The New York Historical Society has lent the museum the painting for the duration of the exhibit. In fact, when the historical society shipped the painting across country, the truck it traveled on came over Donner Pass, which was the first time in the life of the painting that it had been near Donner Pass.

In the museum's media gallery, a 30 minute documentary about Lake Tahoe and the exhibit, produced in conjunction with KNPB, will be shown. The documentary will also air on KNPB channel 5 throughout the exhibit's run, from August 22 to January 10. A book related to the exhibit will be co-published by Skira Rizzoli and the Nevada Museum of Art. The book will be available for sale in the museum store, select area bookstores, and Amazon beginning September 1.

Tahoe: A Visual History opens at the Nevada Museum of Art August 22 and runs through January 10, 2016. Be sure to mark your calendars. You won't want to miss this once in a lifetime opportunity to learn things about Lake Tahoe you never knew existed.