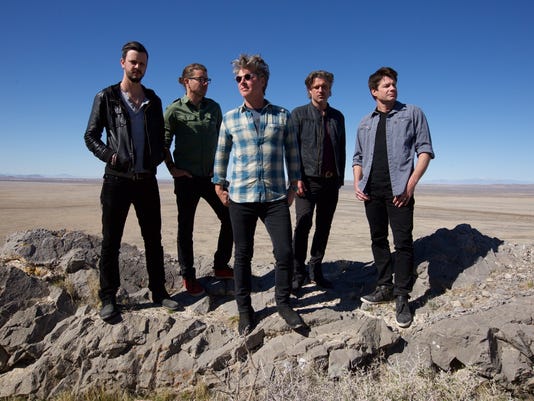 That gap ended Oct. 2 with the release of the group’s new album, “See What You Started By Continuing.”

The band plays at 8 p.m. Nov. 6 at the Silver Legacy's Grande Exposition Hall.

But it’s not like the three core band members were just sitting back resting on their laurels during the break.

Frontman and songwriter Ed Roland branched off and started a side band called the Sweet Tea Project. That group released a debut album, “Devils ‘n Darlins,’ in 2013 and has a second album recorded and just needing to be mixed. Roland also made a solo album and he toured with Kevin Griffin, frontman of Better Than Ezra, in a duo project they billed as the Southern Gentleman.

Meanwhile, Roland’s brother, guitarist Dean, formed a duo, Magnets & Ghosts, with Ryan Potesta and released two albums, “Be Born,” and “Mass.” Roland said his brother and Potesta have a third album recorded. Bassist Will Turpin also got into the act, making a pair of EPs, “The Lighthouse” and “The Lighthouse (Live from Real 2 Reel Studios).”

“I think there’s a total of eight pieces of work in those six years.

So when we say we took time, it wasn’t necessarily to just relax,” Roland said. “It was more to get away from the Collective Soul world and kind of just go do what we wanted to do. And it could have been relaxing if we wanted to, but everybody loves music. I think when we came back to do Collective Soul, everybody was energized, missed Collective Soul, understood what it was and was very proud of what we had accomplished and what we are musically.”

When Collective Soul finished two-plus years of touring behind its 2009 self-titled album (commonly called “Rabbit” because of the critter pictured on the cover), things in the band were less than stellar.

“That road will beat you down after awhile. It wasn’t fun,” Roland said. “There were a couple of people that just didn’t want to be out there and weren’t making it a pleasant experience for other people that did. It was just time. We’d done, what, 16, 17 years, really, a lot of work in that time. We just needed a break.”

One of the musicians who Roland said lost interest in doing Collective Soul was guitarist Joel Kosche, who had been in the group since 2001, when he replaced original guitarist Ross Childress. The band also parted ways with touring drummer Cheney Brannon.

Collective Soul did attempt to resume its activities one time during the hiatus.

“We did try to go to the studio once, about three years ago,” Roland said. “You could just feel, I could feel, that it was just not going to happen.”

So Roland ditched the songs Collective Soul from that session, and all three band members returned to their outside pursuits.

“Nothing felt (promising),” Roland said of the aborted 2012 songs.

“It’s one of those period things where you go, ‘Nah, I don’t even want to remember that time. That’s cool.’”

When the Roland brothers and Turpin decided last year to take another run at restarting things with Collective Soul, there had been some important developments.

For one thing, there was a new drummer in Johnny Rabb, who was hired after Roland and Turpin saw him at NAMM (National Association of Music Merchants) show.

“He was doing a seminar,” Roland said. “Then Will and I just walked over and watched him play. Will was like ‘Do you want have him audition?’ I’m like ‘He’s overqualified. If we want him, we should ask him.’”

The new band members helped provide the spark that was missing three years earlier during the aborted attempt to make a new Collective Soul album.

“With ‘See What You Started,’ like there was new blood in there and they were excited,” Roland said. “We fed off of that excitement, which we needed. After 20-something years, sometimes you can kind of just get, go through the motions. That’s why I stopped. I didn’t want that. That’s where it was going.”

Getting back to its roots

As the group members got going on “See What You Started By Continuing,” they also came in focused on the type of album they wanted to make. In a word, the core trio of Ed and Dean Roland and Turpin wanted to get back to the group’s roots and rock out.

“We made no excuses. We’re a rock band,” Roland said. “When we came back, we wanted to go back to that.”

“See What You Started By Continuing” fulfills that mission statement.

The opening track, “This,” will remind fans of earlier hits like “Shine” and “Gel,” with its fuzzy guitars, crisp beat and big pop hooks. The band rocks even harder on “Exposed,” “Confession,” “Am I Getting Through” and “Contagious,” amping up the guitars and beats without losing the melodic punch that has always been a hallmark of the Collective Soul sound. The closest things to a ballad are “Tradition” and “Without Me,” a pair of mid-tempo tunes that still have considerable heft.

That tuneful rocking sound has served the band well. Formed in Stockbridge, Ga., in the early 1990s, the band’s first three albums, “Hints Allegations and Things Left Unsaid,” “Collective Soul” and “Disciplined Breakdown” each went platinum and produced multiple hit singles. The band’s commercial fortunes have gradually faded since then, but the band went on to release five more studio albums that gained favorable reviews and produced another handful of songs that have gone top 20 or better at various radio formats.

The steady release of albums that continues with “See What You Started By Continued” (the band’s ninth full-length studio release) is one thing that separates Collective Soul from many other groups that have been around for two decades or more. With albums no longer selling the way they did pre-2000, some groups have focused simply on touring and playing their hits. But Roland has reasons for continuing to make new albums a priority for Collective Soul.

“I think we’re a better band than when we started. I think we’re a better band than (we were on) ‘Rabbit,’” he said. “I think I’m a better songwriter, Will’s a better bass player, Dean’s a better guitarist, and I want to show that to people. Whether it sells or not, I want people to know that we’re still getting better at what we’re doing because that’s what we want to do. We always wanted to be a band, and you want people to know ‘Hey, I appreciate you liking the past, but check this out.’”

Collective Soul will give fans a chance to check out five or so of the new songs in its set as the band tours this fall.

“Of course, we’ll add all of the songs from the catalog,” Roland said. “Being our ninth recording, we have a lot of songs to choose from. I was actually up last night writing down a set list. And every time I’d present one to one of the guys, they’re like ‘We’ve got to play this song.’ (I’m like) ‘We’ve only got so much time, buddy.’ It’s a good problem to have.”