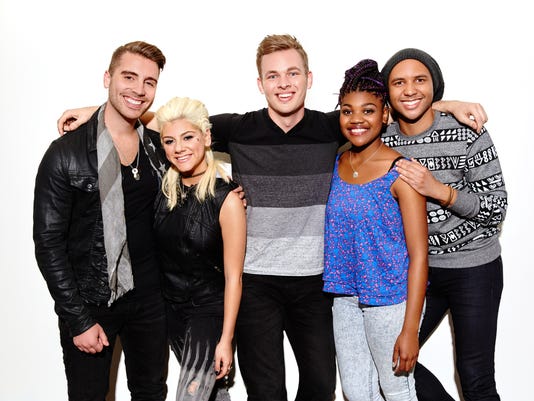 As singer/guitarist of the Connecticut band Beach Avenue, he appeared on the NBC television talent show, "America's Got Talent," in 2014. That experience soured him on the whole concept of music competition shows.

"We got through the first round, and when they eliminated us before the voting, I was like, 'I don't want to do these shows anymore,'" Fradiani said in a recent phone interview. "I remember I said that to my drummer. 'I'll never do another singing reality show thing like that ever again. I just want to keep writing and doing my own thing.'"

Last year, though, Fradiani found himself auditioning for "American Idol." This time, he didn't get voted down at all. Fradiani emerged as the season 14 champion, taking the crown in the final over Clark Beckham. Since his big win, Fradiani has been busy co-writing songs for his debut album and rehearsing for "American Idol Live," the tour that for years has followed the completion of each season of "Idol." The show makes a stop in Reno on Aug. 21 at Silver Legacy.

Fradiani, as this year's "Idol" champion, will perform his own set near the end of the evening. But this year's tour will be different from the previous outings, as only the top five finishers will perform, instead of the top 10. Fradiani believes this change will make for a better show because each performer will have more time on stage.

"There will be some songs from the (TV) show, and I'll be able to kind of talk about why I chose some of the songs," Fradiani said. "I just think you're going to feel more connected to the contestants than you were from the years past or from just watching the show."

Some of the intimacy of this year's show will come from the other major change in the tour. Instead of visiting arenas, "American Idol Live" is mostly booked into theaters. The smaller venues may also be another outcome of the declining popularity of the long-running show, which at its peak was easily the most popular on television, reaching more than 30 million viewers for season finales four through seven. By contrast, season 14's finale in May drew more than 8 million viewers.

"American Idol's" producers have announced that next season will mark the end of the show. They've promised that it will be a unique season for "Idol," one that will have an element of celebrating the show's history, while also having contestants vying for the final "American Idol" crown.

Fradiani will be trying to buck the recent trend of "American Idol" winners who have failed to make an impact with their debut albums. In its early years, the show lived up to its promise of being a star-making endeavor, producing Kelly Clarkson and Carrie Underwood. Other "Idol" alumni, including Phillip Phillips, Jennifer Hudson, Chris Daughtry, Adam Lambert and Scotty McCreery, have reached considerable success.

Fradiani thinks he has one major advantage over recent "Idol" champions – the enthusiastic support of his record label, Big Machine, and its president, Scott Borchetta. Known for its shepherding of Taylor Swift, Big Machine became the new record label partner of "Idol" for season 14, after RCA/19 Entertainment was with the show since it began.

"This guy (Borchetta) is not a guy who likes to lose. He's a very, very competitive guy," Fradiani said. "You know, he put himself out there this year, and he really did have to put his money behind this, and I am signed to him. So he wants this to work just as much as I want this to work, and that's so huge to have that."

Fradiani thinks his biggest talent is his songwriting, but how much original material will make his debut album is an open question. Big Machine has Fradiani writing with a number of outside tunesmiths, but Borchetta has been quoted as saying his team's main job for Fradiani is to hunt down the best songs they can find from outside songwriters – a comment that doesn't exactly sound like a vote of confidence.

Still, Fradiani has accepted the situation, knowing outside material from established songwriters might give him the best shot at achieving his goal of getting songs on top 40 radio.

"It's going to come down to which songs are the best songs," Fradiani said. "If I'm not making the cut on those, then that's what it is. And right now, I need to start my career at a really high level, and then I'll get more opportunity (to record original songs). But the one cool thing is they're giving me that shot (to write) right now, so that's all I could ask for. "