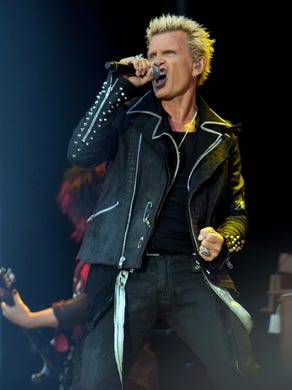 Reno's Grand Sierra Resort is the happening place to be in August. Some major musicians will be taking the stage, including a duo who's celebrating 35 years of touring together, a couple of country singers, and two ladies who are tearing up the charts when it comes to more pop-style music.

Rocker Billy Idol takes the stage to promote his new album, Kings and Queens of the Underground. Famously getting his start in the old school rock band, Generation X, Idol went on to gain international fame on the MTV reality show, Second British Invasion. His time on the show not only renewed interest in his music, but also made him a television star. You won't want to miss Idol's first stop on his new tour!

Alabama native Jason Isbell is bringing his unique blend of soul, country, and rock to the Grand Stage, with special guests Dawes and Damien Jurado. Isbell uses his lyrics to tell a story and isn't afraid to let his messy, poetic side show. According to billions.com, "[Isbell] reveals his own vulnerabilities - his successes and failures - that listeners might find kinship or perspective."

Jazz pianist Diana Krall will be singing some of her greatest hits as well as the greatest hits of other classic musicians, such as The Mamas and the Papas and Bob Dylan. Known for skilled piano playing and soulful voice, Krall makes each melody sound inspired and fresh. The only jazz pianist to have all eight of her albums debut at the top of the Billboard Jazz charts, this is an evening you won't want to miss.

These two uber-talented ladies will be taking the stage together for the experience of a lifetime. With support from upcoming artist Rachel Platten, The Girls Night Out, Boys Can Come Too tour is bound to knock your socks off. Singing many of the songs their fans already know and love, Perri and Caillat also have a few new gems up their sleeves.

Take a walk down the 80s memory lane with rockers Pat Benetar and Neil Giraldo. The husband and wife duo are celebrating their 35th anniversary of touring and working together, and they're still making beautiful music after all these years. Besides hitting all the major hits like Love is a Battlefield and Hit Me With Your Best Shot, they'll also be performing slightly less familiar, but still excellent, tunes.

Join country crooner Vince Gill for a one night only performance on the Grand Stage. With more than 26 million albums sold and 18 Grammy awards, Gill still puts on a great show after all these years. This current tour is to promote his latest album, Bakersfield, which is a tribute to Buck Owens and Merle Haggard. "The album is very much borrowed from and inspired by the originals," Gill says, "but it's done in our own way—the way we chose to play and sing it. There was no point in doing a note-for-note."