While Charlie's varied taste in music was being whetted, he began to gravitate toward the Western aesthetic. 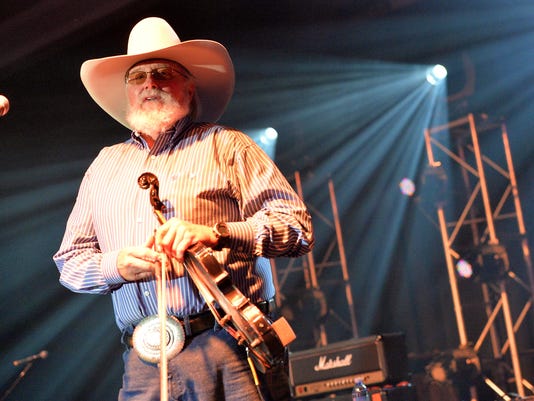 Call it country or pop or Southern rock.

Just don't do it to Charlie Daniels' face, because he loathes musical labels.

"I say, I don't know which genre you can put us in," he said in a recent phone interview with Best Bets.

guitarist and fiddler behind the chart-topping hit "The Devil Went Down to Georgia" will be coming down to the Nugget Casino Resort on June 13 as part of the Country Crossroads concert series.

Daniels' inspirations have always been eclectic, beginning with his upbringing in Gulf, N.C., where gospel flourished at church, local bands tended toward bluegrass and just about everything else was piped in from Nashville.

"Radio stations were few and far between. They played all kinds of stuff, because they had to service the whole community," he said. "They played country music for the housewives about mid-morning. And when the kids got home, they would be playing the pop music of the day. I went from Big Band to the start of rock 'n' roll."

While Charlie's varied taste in music was being whetted, he began to gravitate toward the Western aesthetic.

It can be seen in his signature "bullrider" cowboy hat and at his Twin Pines Ranch in Tennessee, where cattle are roped and horses are bred, just one of the endeavors that inspired Southern music historian Michael Buffalo Smith to dub a "Renaissance hillbilly."

Again, it goes back to his roots.

"Being raised in a small town in the South, every theater showed the old black-and-white Westerns every Saturday, as regular as clockwork," Daniels said. "Every boy had a cap gun and played cowboy. I got interested in Western culture and then, when I grew up, I found out there was more to it than riding around on horses and shooting people."

Daniels was reasonably grown up by the time he graduated high school. A multi-instrumentalist with a knack for guitar, fiddle, banjo and mandolin, he started a band.

When he began writing songs, he tossed those early influences into a musical blender. The resulting sound has been making folks tap their toes for decades.

He struck gold in 1966 when Elvis Presley recorded the song "It Hurts Me," which Daniels co-wrote with Joy Byers.

The next few years brought lots of prestigious session work, with Daniels playing electric bass on Leonard Cohen recordings and on three Bob Dylan albums, among other gigs.

In 1971, he put out his inaugural solo album, "Charlie Daniels." Two years later he scored a hit with "Uneasy Rider," off his third album "Honey in the Rock," which reached No. 9 on the Billboard Hot 100.

His star continued to rise after he became leader of his eponymous band, with the Southern rock anthem "The South's Gonna Do It (Again)" and "Long Haired Country Boy" charting at 29 and 56, respectively.

The Charlie Daniels Band became household names with the stratospheric success of "The Devil Went Down to Georgia," a electric-charged yarn about a musician vying against Beelzebub's bow, with a fiddle of gold as the prize and his soul at stake.

"I knew we were onto something, but I had no idea what," Daniels said. "AOR (album-oriented rock) stations were our mainstay as far as airplay, and I figured it would be a really good song for us on those outlets. But I also thought there was a possibility that the song could get onto the Top 40 stations."

Following that hunch, Daniels recorded two versions of the song, one in which fiddle-playing Johnny calls the Prince of Darkness "a son of a bitch" and another "clean edit" in which he dismisses him as a "son of a gun."

The move paid off when the song — which earned Daniels a Grammy for Best Country Vocal Performance — hitting No. 3 on the Hot 100 in the fall of 1979.

The following year, it found its way onto rock stations after Daniels and his band were seen playing a five-alarm rendition of "Devil Went Down to Georgia" in the movie "Urban Cowboy."

The band had another hit in 1980 with "In America," a song warning would-be interlopers like the Cold War Soviet Union that Americans are ready to stand together in the name of freedom.

Daniels often is serious when discussing current events or politics, and he's never been afraid of the backlash that comes with offering strong opinions on such topics.

Even so, he has a lighter side that also shines through. When asked how he keeps his bow hand in shape, he joked it's done by "eating food and using a fork."

In fact, he keeps his guitar and fiddle handy for regular practice and, despite having been inducted into the Grand Ole Opry in 2008, isn't resting on any laurels.

Daniels and his band put out a new studio album every few years, the most recent of these being the 2014 offering "Off the Grid: Doin' It Dylan," a tribute album featuring covers of Bob Dylan classics like "Mr. Tambourine Man" and "Just Like a Woman."

And he has gigs lined up through the fall at venues across the United States. It may sound strenuous, but the traveling life is in Daniels' bones.

"I'm proud of being 78 years old and still touring," he said.

What: The Charlie Daniels Band, as part of the Country Crossroads event at the Nugget