The biggest alpine lake in North America is warming faster than ever, due in large part to a changing global climate. 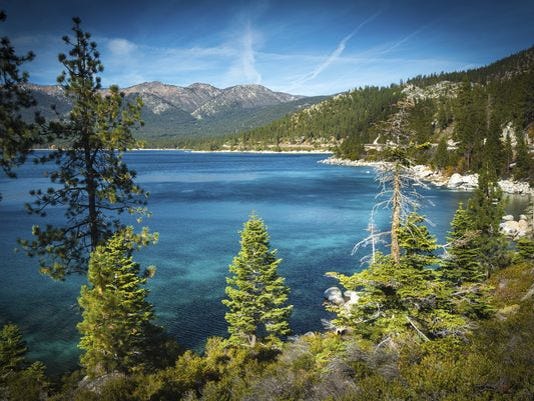 The biggest alpine lake in North America is warming faster than ever, due in large part to a changing global climate.(Photo: CelsoDiniz, Getty Images/iStockphoto)

The biggest alpine lake in North America is warming faster than ever, due in large part to a changing global climate.

That’s according to scientists who study Lake Tahoe to produce reports on everything from water temperature to clarity to invasive species.

“That is a huge amount of water,” Schladlow said of Lake Tahoe, which reaches more than 1,600 feet deep. If the water were spread out over an area the size of California, it would still be 15 inches deep, he said.

“It takes a lot of energy to raise that a half degree,” Schladow said. The changing nature of Lake Tahoe is a reflection of the world around it. Air temperatures in the region are getting warmer and a shrinking percentage of precipitation is coming in the form of snow.

During the year covered by the most recent data, which ended Sept. 30, 2015, only 6.5 percent of precipitation came in the form of snow.

That means the inflows to the lake came in the form of rain, which is warmer and contributes to the warming conditions of the water.

Schladow noted the warming climate is most pronounced when looking at nighttime low temperatures.

The average low temperature at the lake in the most recent year covered by the study was 33 degrees. Although it was a decrease of .7 degrees from the previous year, it was still the fourth warmest on record and continues an overall warming trend.

Although the Lake Tahoe region enjoyed a slightly snowier-than-normal winter after the period covered in the latest data, Schladow doesn't expect the warming trend to change much.

That's because 2016 is on track to be the warmest year on record globally, he said.

"It is a lot warmer than it used to be so it is not going to change that much," he said.

Warming water can have major implications for Lake Tahoe, or any lake. Among them is reduced mixing of the water.

Mixing occurs when cold inflows sink to the bottom of the lake and push water from the depths toward the surface.

“Largely on account of climate change the lake is warming,” Schladow said. “The same factors that are affecting Tahoe are playing out in every lake and every reservoir not just in California but through the entire west.”